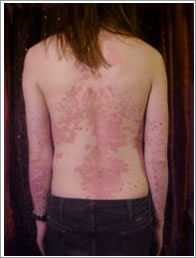 Psoriasis is a hyperproliferative skin disorder affecting also possibly the joints. It is hypothesized to be an immune-mediated disease. It commonly causes red scaly plaques to appear on the skin. The scaly patches caused by psoriasis, called psoriatic plaques or lesions, are areas of excessive skin production and inflammation. Skin rapidly accumulates at these sites and takes a silvery-white appearance. Plaques frequently occur on the skin of the elbows and knees, but can affect any area including the scalp and genitals. Psoriasis is not contagious.

The disorder is a chronic recurring condition which varies in severity from minor localised patches to complete body coverage. Fingernails and toenails are frequently affected (psoriatic nail dystrophy). Psoriasis can also cause inflammation of the joints, which is known as psoriatic arthritis. Ten to fifteen percent of people with psoriasis have psoriatic arthritis.

The cause of psoriasis is not known, but it is believed to have a genetic component. Several factors are thought to aggravate psoriasis. These include stress and excessive alcohol consumption and smoking. Individuals with psoriasis may suffer from depression and loss of self-esteem. As such, quality of life is an important factor in evaluating the severity of the disease. There are many treatments available but because of its chronic recurrent nature psoriasis is a challenge to treat.

Description
A diagnosis of psoriasis is usually based on the appearance of the skin. There are no special blood tests or diagnostic procedures for psoriasis. Sometimes a skin biopsy, or scraping, may be needed to rule out other disorders and to confirm the diagnosis. Skin from a biopsy will show clubbed Rete pegs if positive for psoriasis.

Symptoms
Psoriasis is usually graded as mild (affecting less than 3% of the body), moderate (affecting 3-10% of the body) or severe. Several scales exist for measuring the severity of psoriasis. The degree of severity is generally based on the following factors: the proportion of body surface area affected; disease activity (degree of plaque redness, thickness and scaling); response to previous therapies; and the impact of the disease on the person.

The Psoriasis Area Severity Index (PASI) is the most widely used measurement tool for psoriasis. PASI combines the assessment of the severity of lesions and the area affected into a single score in the range 0 (no disease) to 72 (maximal disease).

Treatment
There can be substantial variation between individuals in the effectiveness of specific psoriasis treatments. Because of this, dermatologists often use a trial-and-error approach to finding the most appropriate treatment for their patient. The decision to employ a particular treatment is based on the type of psoriasis, its location, extent and severity. The patient’s age, gender, quality of life, comorbidities, and attitude toward risks associated with the treatment are also taken into consideration.

Medications with the least potential for adverse reactions are preferentially employed. If the treatment goal is not achieved then therapies with greater potential toxicity may be used. Medications with significant toxicity are reserved for severe unresponsive psoriasis. This is called the psoriasis treatment ladder. As a first step, medicated ointments or creams are applied to the skin. This is called topical treatment. If topical treatment fails to achieve the desired goal then the next step would be to expose the skin to ultraviolet (UV) radiation. This type of treatment is called phototherapy. The third step involves the use of medications which are ingested orally or by injection. This approach is called systemic treatment.

Over time, psoriasis can become resistant to a specific therapy. Treatments may be periodically changed to prevent resistance developing (tachyphylaxis) and to reduce the chance of adverse reactions occurring. This is called treatment rotation.